Native Advertising  was fast becoming a part of buzzword bingo by the end of last year.  But what exactly is it? It is, apparently, content that contains a branded message and integrates with a website’s indigenous news feed or other content. So that’s things like:

The cry from its advocates is that this kind of advertising helps to create a deeper engagement level with the consumer.  Others argue that this stuff has been around for a while, and it’s too often irrelevant, poorly written and badly targeted.  At best something to ignore, at worst something that interrupts the flow so much it irritates.   That said, there is a broad consensus that native advertising differs from interruptive advertising in two important ways: 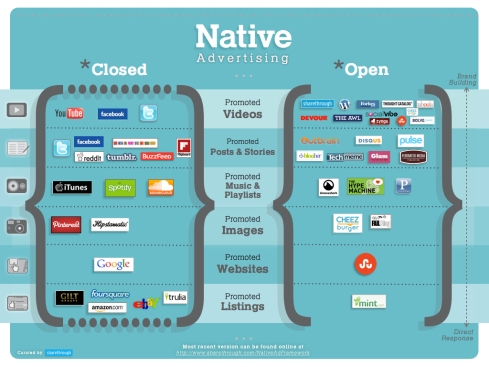 So, is this advertorial re-branded or the saviour of online advertising?  Have a flick through this handy white paper (courtesy of Solve Media) and decide. In a world where 99.8% of banner ads are ignored and video preroll ads (the last online saviour) have massively increasing skip rates, maybe it is time we looked closer at it, whatever it’s called.